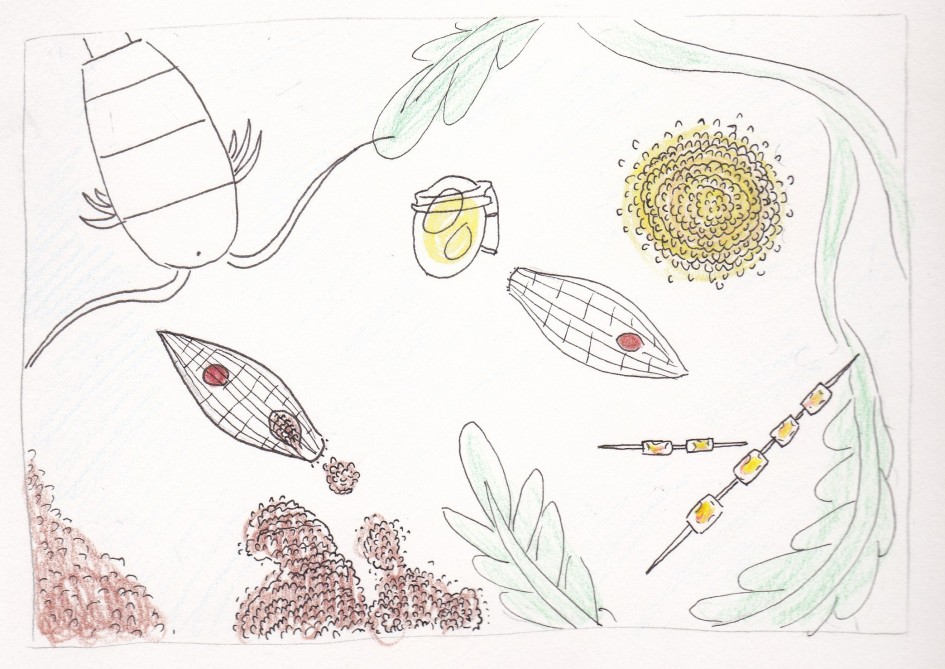 The Tiarina fusus is a prostomatid ciliate zooplankton known for its abundant populations during the occurance of red tides.  While it is not the cause of red tides, it appears to prey on the various dinoflagelletes that are responsible for the phenomenon.  T. fusus is a common zooplankton that appears in pelagic coastal regions in all parts of the world.  The species does not have a common name besides its scientific name, and it is generally referred to simply as a ciliate from its class Ciliatea.  Cilia are organelles with hairlike structures that serve a motile function for cilliates.  The ciliates are a group of heterotrophic protozoans, unicellular eukaryotes whose famous characteristic is its cilia that are primarily utilized in its interactions with the world around the organism.  In T. fusus’ case, these interactions include feeding and swimming (Guiry, M.D. & Guiry, G.M. 2015).  The T. fusus has been observed to ingest a maximum of seven different species of dinoflagellates, and has been found to contain multiple semi-digested prey cells within its protoplasm simultaneously.  As it is common for a behavior known as grazing, the T. fusus takes only four to five minutes after ingesting a prey cell before it ingests another (Jin-Jeong et al. 2002). b- prey cell and food vacuole

The T. fusus’ body takes on a more or less spindle-shaped form with longitudinal and lateral ridges, an oral cilia ring with anterior protuberances, and it contains one circular macronucleus with a food vacuole.  Swimming in spiral tracks, the T. fusus’ movements are analogous to a drill, with its pointed anterior and posterior acting as an axis to its swiveling round barrel-esque body.  Erratic and unpredictable, it seems to glide through the water indiscriminately, sometimes moving backwards or swimming in a circle with the help of the abundant cilia around its outer membrane.  The T. fusus measures at a length between 60-90 µm and at a width between 20-35 µm.  It prefers to reside in an ecological temperature around 5-10 ºC and salinity of 12-16 ‰ (Fauré-Fremiet E. 1951).

Role in Ecosystem and Feeding

While not a lot is known about the overall grazing impact of Tiarina fusus on marine red tidal waters, the ciliate is known to have a significant variety of natural prey that include red-tide dinoflagellates which can be consumed by T. fusus up to its own size.  In Japan, T. fusus has a significant grazing impact on the populations of autotroph Akashiwo sanguinea when red tides occur in Tokyo Bay every May (Jin-Jeong et al. 2002).  The T. fusus travels at a maximum speed of 3125 µm/s-1 which relative to other plankton its size is fast, therefore it must consume frequently to compensate for the great energy loss.  The oral cilia ring is an effective adaptation for its demanding energy conversion needs.  It has a special ability to ingest prey of its own size, including Dinophysis.  However, when T. fusus comes in contact with heterotrophic Dinophysis rotundata or D. hastata, the reversal of roles occur.  At first, the dinoflagellate releases a discharge that attaches itself to the ciliate, binding the two together, and T. fusus continues on swimming with the Dinophysis connected to it.  Then, the Dinophysis extends its pseudopodium onto the ciliate, rendering T. fusus immobile and allowing the dinoflagellate control over movement.  The Dinophysis gradually consumes T. fusus as it swims around, swelling substantially and assuming a more rotund shape.  Dinophysis rotundata essentially absorbs Tiarina fusus’ energy during this unique power exchange for two to three hours (Hansen, J. 1991).  These two species have the uncommon relationship of being able to prey on each other, where the predator becomes the prey. Tiarina fusus in the environment

Based on the information I have found, or lack thereof, there is still a lot of research to be conducted on Tiarina fusus.  In most scientific literature with mentions of this organism, T. fusus is usually only mentioned in relation to other organisms, and I believe this comes from a lack of interest in the species.  While early scientific descriptions of T. fusus date back to the late 1800s, there was only one source that had any significant information on the organism from the 21st century.  For those in the scientific and research fields, it is crucial to remind ourselves that our perspectives are shaped by existing paradigms that are limited by our current knowledge.  What we know about the world is a set of conclusions we have drawn from the small window of information that has been accessed by humans.  Every thing has the potential to contain information that can lead to paradigm shift.  Even something as seemingly insignificant as a ciliate might lead to groundbreaking findings.  As for humanity in the 21st century, we do not know as much as we might think. Hansen, Per Juel. “Dinophysis – a Planktonic Dinoflagellate Genus Which Can Act Both as a Prey and a Predator of a Ciliate.” Marine Ecology Progress Series 69 (1991): 201-04. Print.