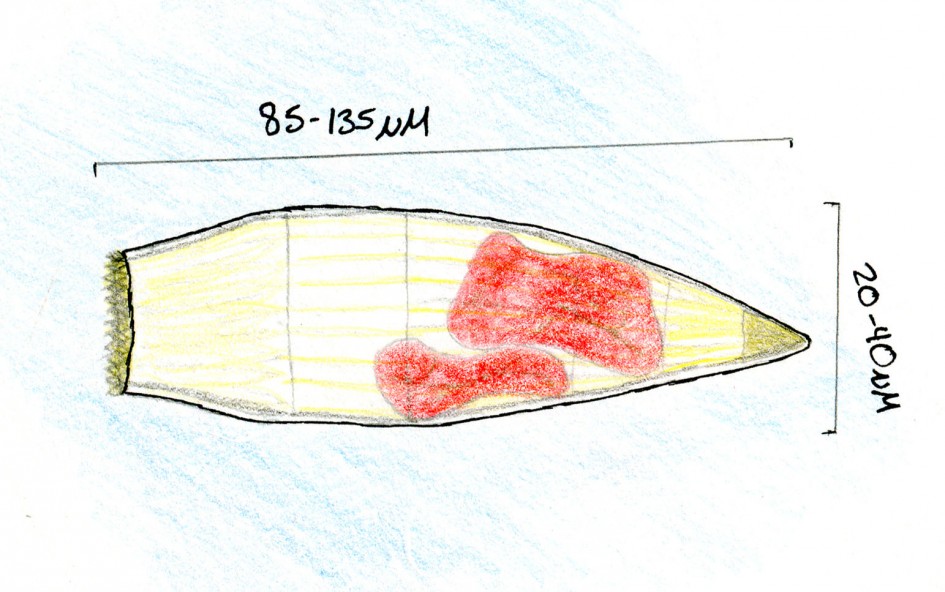 About two decades ago there was a paradigm that microbial food chains were built upon the principle of a somewhat fixed size relationship between prey and predator of 1:10. A study conducted 23 years ago showed that two common predators of the ciliate T. fusus were the heterotrophic dinoflagellates Dinophysis rotundata and heterotrophic D. hastate. However, the autotrophic Dinophysis rotundata and autotrophic D. hastate can become prey to T. fusus. This study proved that prey and predator relationships of microbial organisms are not on a fixed size relationship as similarly sized species can act as both predator and prey to one another. Tiarina fusus (T. fusus) are ciliates. They can be described as spindle-shaped organisms with rectangular surface platelets. They have an average width of 20-40 micrometers and an average length of 85-135 micrometers. T. fusus can be found in the neritic zone where salinity is between 30-35 and temperature is between 8 and 22 degrees Celsius. They are heterotrophic protists. In one study it was shown they feed on numerous dinoflagellates that have been found to produce red-tides and/or toxic algae. T. fusus has been found to have a rapidly increasing growth rate when consuming S. trochoidea, H. akashiwo, (A raphidophyte that can cause large-scale mortalities of fish when forming red tides) and a maximum specific growth rate when feeding on L. polyedrum. Tiarina fusus has also been found to consume the heterotrophic and mixotrophic dinoflagellates Fragilidium, Protoperidinium, and P. crassipies. The growth rates of feeding on these species do not compare to the growth rates when feeding on S. trochoidea, H. akashiwo, and L. polyedrum but it was found that when T. fusus was grown on the same prey species the growth rates were near that of the rapid and maximum growth rates.

From my recent research and inquiries on T. fusus I have found that there are few studies that have been done on this particular species. I found it most interesting the samples in which I was able to identify this species were from Budd Inlet, WA, USA but I could not find any resources that show T.fusus has had a presence in the Puget Sound. My theory is that as T. fusus has been largely observed near Japan and South Korea the organisms made the long journey across the Pacific Ocean. Just as docks and moorings from Japan ended up on the beaches of Washington and Oregon after the tsunami in 2011. I then further wonder if the two events are related.

I believe that we humans could learn a lesson from T. fusus and other microorganisms. The lesson being that T. fusus have not been observed consuming one another. As I stated in my third essay of the quarter, humans have been extinguishing each other since the dawn of our species for many reasons. Some of those reasons being technological progression, religion, and demands for increased territory. With so many discovered and undiscovered organisms, and ¨fish in the sea¨ we should make an attempt to neutralize the constant human-human conflicts distracting us from maximizing our production and potential. To summarize, unite knowledge and work better together.

Per Juel Hansen. (1991). Dinophysis – a planktonic dinoflagellate genus which can act both as a prey and a predator of a ciliate. Marine Biological Laboratory, University of Copenhagen, Strandpromenaden 5, DK-3000 Helsinger, Denmark.