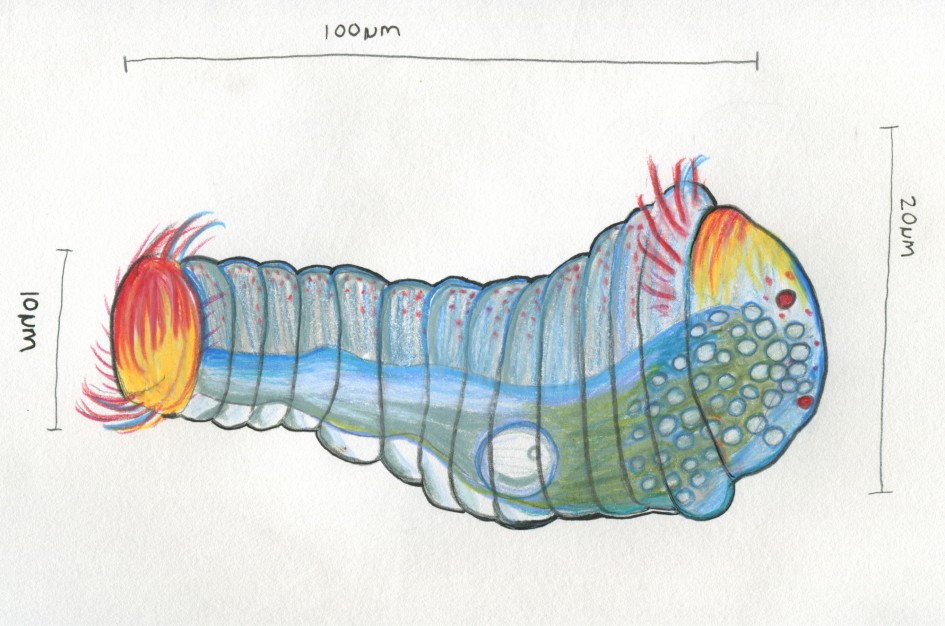 The Nephtys metatrochophore is of the Annelid order and the Polychaete Nereidae family.  Annelidia, also known as ring worms, include thousands of kinds of species and “constitute the dominant benthic macrofauna from the intertidal zone down to the deep sea.” Annelidia are split into two groups: Clitellata, which are earthworms and leeches, and polychaeta, which are bristle worms like the ones depicted in the pictures.  Little is known about the exact evolutionary measures that divided Clitellata from polychaeta. [1]  The polychaeta metatrochophore “has two ciliary bands, the anterior prototroch and the posterior telotroch, which help in locomotion, and 10 body segments.”  As the organism grows, its cilia will become less helpful with movement.[2]  The worm that is depicted in the pictures is in a younger stage of life and it will eventually change form into a larger organism. Polychaeta can be found in shoreline environments along the tidal line, all the way down to the bottom of the seafloor and everywhere in between.  These organisms vary significantly in size and shape but are abundant in oceanic communities and are significant to aquatic food chains.  Because there are so many polycheata distributed throughout the waters, they are excellent research specimen for the overall health of the ocean. Some polychaeta are vestimentiferans, meaning they live in upright, self created tubes near hydrothermal vents or sturdy rocks and share a symbiotic relationship with other organisms for survival.[3]  The movement of Nephtys polychaeta can be described as a kind of contraction of muscles or as a locomotion.  The movement of polychaeta depend greatly on its habitat and stage of life.  These organisms are known to burrow. [4]  Other  polychaeta can be found closer to the surface of the ocean.  The population and ecology of many polychaeta depend on physical factors of their environment and the fluctuation of other species presence in their vicinity.  Because of their size and way of life, polychaeta are “long-lived species (i.e., years) with annual reproductive cycles and slower development rates.” This species is known to be omnivores, predators, and scavengers. These Polychaeta grow up to 6 feet in length and live in self-created tubes at the bottom of the ocean near hydrothermal vents. Inspired by an image found at http://www.invertebrates.si.edu

Polychaeta go through a kind of metamorphosis in their lifetimes.  The polychaete depicted in the animated gif and most of these drawings is in a larval form.  This means that the organism was about to go through important changes in its development and lifestyle.  The organism was in a planktrophic stage because “the further evolution of larvae proceeds towards the information of special ciliated structures resulting in a more specialized larval form.”  It is difficult to identify all of the larval forms of polychaeta because the development varies significantly even within one group of polychaete.  To describe types of larva, one must consider many factors other than just visual ques.  One must understand reproductive aspects of the given kind of polychaete and also must understand the environmental variables at play that could affect its development.  “Sveshnikov (1988) grouped polychaeta according to the different larval types produced, underlining a morphological evolution of the larval forms.” Sveshnikov’s groups depended on whether the species was benthic or pelagic, whether or not the species received parental care, and if the species was producing trans-oceanic larvae.  Despite all of these differences, it seems as though most polychaete larvae do not spend a large portion of their lives in benthic zones of the ocean.[5] The ecological significance of these organisms is greatly attributed to their tendency to burrow.  Polychaete worms are capable of processing ocean sediment and will sift and burrow in the ocean floor to an extent that the species contributes significantly to rotating and distributing nutrient-rich matter throughout the ocean.[6]  In areas with a large human presence, polychaete worms have been harmed in the case of waste management.  When humans dispose of waste into the ocean, studies have found that the survival rate and consequentially the population of polychaete worms is negatively impacted.[7]  It is important for the productivity of the waters that nutrient-rich sediments are cycled through by these burrowing worms.  If our irresponsible consumption and disposal of waste creates harm to the oceanic community, we will be contributing to the demise of the productivity of the entire planet.  We as humans should view these entities as the tillers of the soil.  In terms of farming, tilling the soil is essential to the productivity and the yield of the crop.  Polychaete worms are just as important to the ocean’s health and productivity as the farmer’s tilling activities are to the abundance of food in this world. Along with Polychaeta being excellent “tillers of the soil” they can also be compared to aerating soil with those special aeration strap on shoes. Here is a polychaete version of aeration shoes, providing Oxygen to the mudflat substrates of the Washington Coastal region.

[7] Zajac, Raman N., and Robert B. Whitlatch. 1988. “Population Ecology of the Polychaete Nephtys Incisa in Long Island Sound and the Effects of Disturbance”. Estuaries 11 (2). Coastal and Estuarine Research Federation:117-33.http://www.jstor.org/stable/1351999.