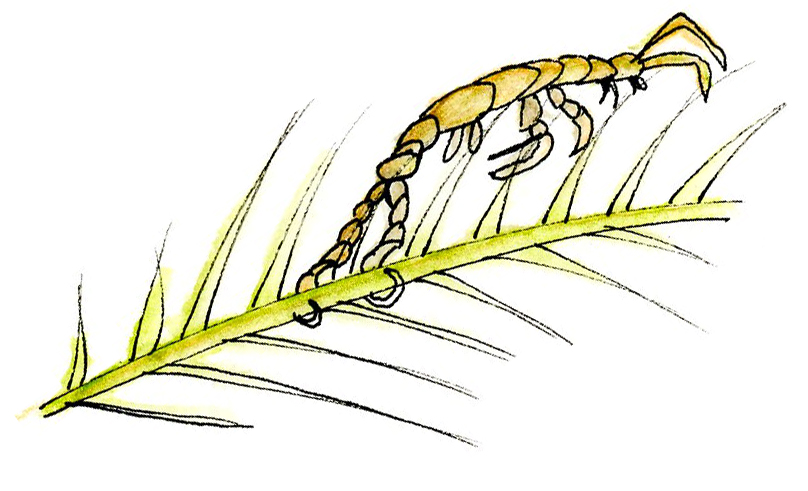 Caprellidae is a family of amphipods (Phylum) more commonly known as the Skeleton Shrimp. The reason why they got a name like that is because of their threadlike slender body and color which helps them to almost disappear among the fine filaments of seaweed, hydroids and bryozoans. They can get up to one and half inches or four centimeters. Their diet consists of diatoms, detritus, other amphipods and filtered food particles flowing thru the water.

Skeleton shrimp use their front legs for locomotion. To move, they grasp first with their front legs and then with their back legs, in inchworm fashion. They swim by rapidly bending and straightening their bodies to move from one seaweed to the other.

Development and Sexual Dimorphism  – The eggs of the Caprellidae are contained in the marsupium of the female. The cleavage is superficial, and the embryo develops into the nauplius and then metanauplius within the egg and is grown to generally point four to fife millimeters in size when hatching. Although the hatched larvae are one millimeter or less in length campared to adult Caprellidae, they are already provided with external characteristics similar to those of the adults. The larvae stay in the marsupium till they are liberated at moulting of the mother.

Young Stage: The sexual differentiation becomes more obvious when the Caprellidae attain to about four millimeters in length. In males, antennaes are the same in length and the flagellum of antenna has 5 segments, while there are seven segments in females. In the latter, rudiments of the oostegite begin to appear on the base of gills. In males, nine millimeters long, each pereonite is extended to a shape similar to that in the adult, and the antenna is longer than in females and bears ten flagellar segments. Females of the same size are defined distinctly by their well developed oostegites. 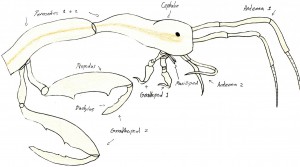 Adult Stage: The females over nine millimeters in length are regarded here as in the adult stage, as no further significant changes occur in their morphology. In the males, however, the antenna extends further with the growth till it may attain to three times as long as the antenna in a specimen eight teen millimeters long; pereonites grow much longer than the others; the elongation seems to occur near the junction between these somites and this feature is the best indication to distinguish the male from the female.

Courtship and mating involve exploration of the female by the male using antennae and maxillipeds followed by moulting of the female and copulation. During courtship and mating, males are very aggressive and will fight off all other animals. There were significantly more deaths from intraspecific fighting between males when sexually receptive females were present. Soon after a successful mating, the female also becomes very aggressive and resists further attempts at mating. The young hatch four days after the eggs are deposited in the brood pouch but remain there for up to twelve hours while their locomotory movements become fully coordinated. The young may be assisted from the pouch by the mother and will initially cling to her body. They scrape epiphytes from her body for food and she will periodically groom them. After a week the young are actively removed by the mother to fend for themselves.