Protoperidinium are dinoflagellates. They are found in found in pelagic, marine environments all over the world. They can grow up to .30mm which is considerably smaller than the width of a human hair. They have thorny or spiny cells that form armor-like plating and protect protoperidinium from the environment and from predators. There is a belt-like groove around the middle of the organism that houses the flagella that allow it to move under its own volition. (Johanesson) 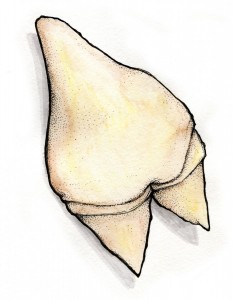 Protoperidinium are heterotrophic which means they can obtain energy from different sources. There is data that suggests that protoperidinium hunts by chemoreception.  When prey is detected, protoperidinium beings to circle in on it, sending out chemical ‘pings’ to determine the precise location. (Buskey) They also cannot adjust the size of their body and must digest their food externally. Like many other dinoflagellates, they do this by extending their ‘pallium’, a thin veil-like feeding structure, which then produces digestive enzymes and begin to break down the prey. Once the prey has been fully digested, protoperidinium withdraws the pallium and ‘eats’ the fluid.