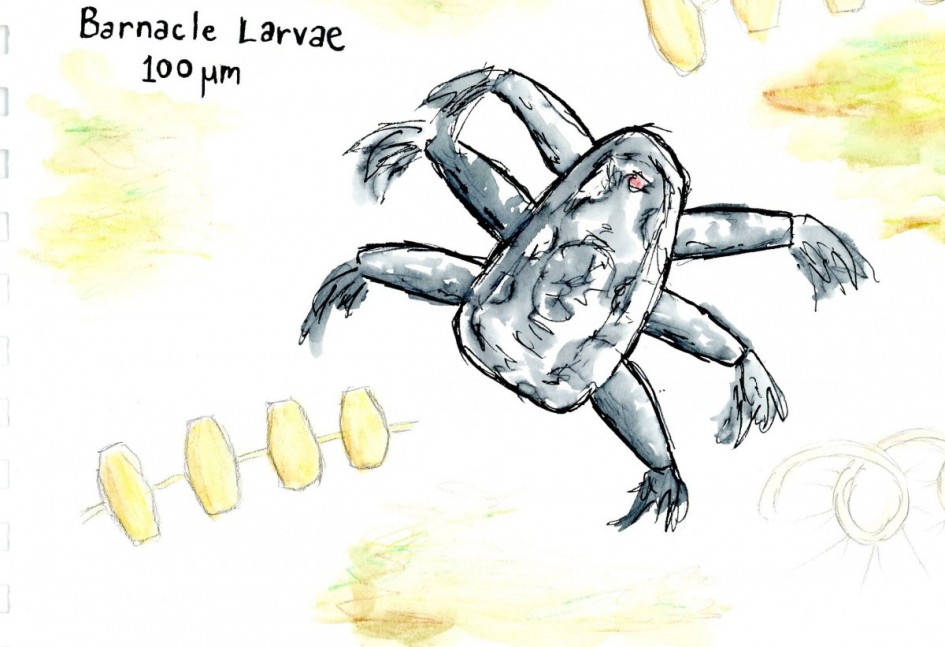 Barnacles have three stages of life: nauplius, cypris, and adult. Nauplius, the earliest stage of barnacle larvae is what was observed. They are Arthropods in the class Crustacea, which means they are related to lobsters and crabs, they both have a hard cover. A way to identify them from copepod larvae is to observe two small horn looking things on from side (Egmond 1999). 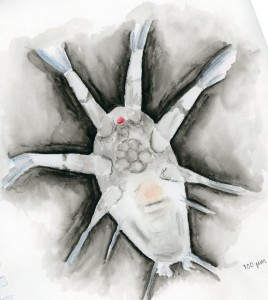 Nauplius also have a white slightly translucent shell made of calcium carbonate. Even with a shell, nauplius still face the dangers of worms, oil spills, shorebirds, snails, sea stars, etc since they swim freely in the water.

They feed on phytoplankton and zooplankton, microscopic plants, and animals in the water and spend about six months developing into their adult stage (Animal Adda 2013).

The stages of life a barnacle goes through each ends with a moult (called Ecdysis) which is where the exoskeleton is shed off so the crustacean can continue to grow. That’s why Nauplii and barnacles look so different from one another. And since the larva do not look like what their adult form will be, it is sometimes hard to identify which crustacean the nauplii is.

Nauplii have a few distinguishing physical features that helps identify them. There are appendages on their head that help with their movement and they usually have one eye, which can be seen as the red spot in the picture above.

Barnacles affect humans by attaching themselves onto human made structures, such as boats or docks, that can lead to the deterioration of such structures. They are also consumed as a delicacy in places like Spain, Portugal, and Japan. Barnacles are also used in forensics when tracking a ship, whale, or just marine debris since they have such a stable isotope in the layers of their shells, it can be read as the barnacles own personal history.