Hermissenda crassicornis are a certain species of gastropod. These hermaphroditic mollusks contain both male and female reproductive parts. Most reproduce and lay their eggs near their food source (e.g hydrozoa). With a length averaging at 3 and 1/4 inches and a width of 3/8 inches. This species remains easy to identify with its bright orange and bluish white stripes and features. These brilliant colors are caused by carotenoids and carotenoprotiens. This species has two pairs of rhinophores at the tip of its head, which it uses to sense prey. On this organisms back there are clusters of tentacle looking appendages called cerata that contain bright orange pigment and white stripes. These ceratum can be used to help with respiration, digestion, and escaping predators. Hermissenda feed on many different organisms ranging from other invertebrates, sponges, coral, and hydroids. (Meinkoth 1981) 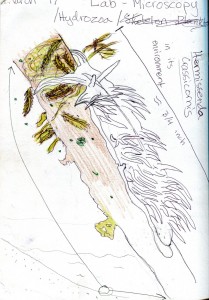 Nudibranchs are carnivores that use bands of curved teeth to tear up food. Their lifespan is ultimately affected by the amount of food available to them, ranging from weeks to up to a year. Each species of nudibranch usually has a certain species that is its main food source. Like other gastropods they have one large foot that it used to move vertically though the water column and cling to other objects. Nudibranchs collects chemicals through digesting other organisms and releases them as a defense mechanism. Their unique colors also provide them with the ability to camouflage and also scare off other organisms. Some nudibranchs store algae in their outer tissues and use the sugars produced by the algae’s photosynthesis as nutrients.

This organism is most commonly found in the range of Sitka (Alaska) to Puertecitos (Baja California), more abundant in the center of this range. They are found living in low intertidal zones, from sub tidal to 35 m on average. Common in spring and summer, varied habitats, usually found in rocky pools, marina floats, pilings, and mud flats. To develop in reasonable numbers and to be able to metamorphose this species needs a food supply of plankton with a larger cell size. (Harrigan, etal  1978). In its adult stage it can be found feeding on substrates on the ocean floor but can also move itself through the water column by flexing its muscles.