This Hiker’s Nightmare is the Medicine Cabinet of the Forest 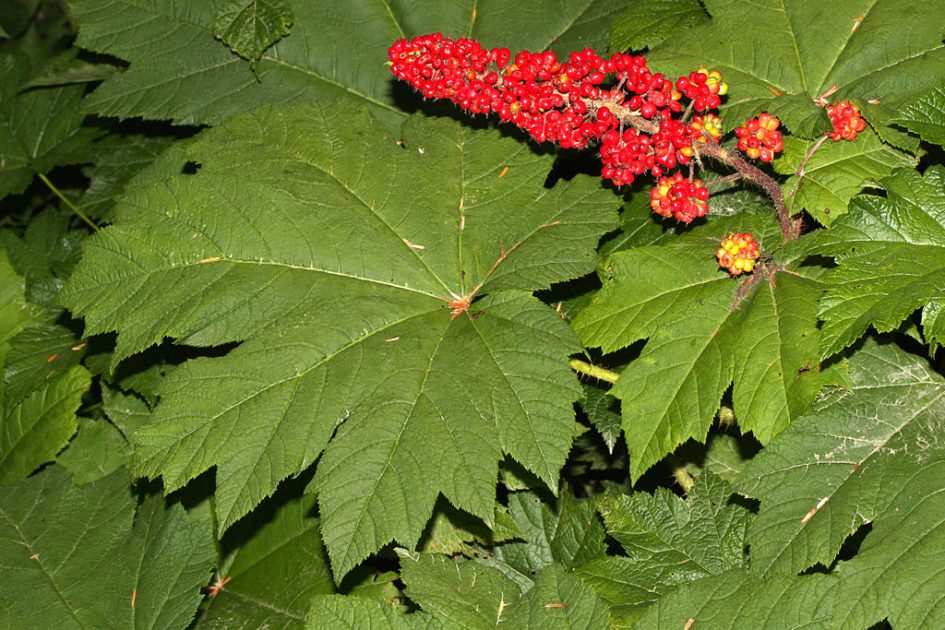 “Make friends with this plant as I have and you will delight in it rather than fearing it.” -Tom Heutte

Getting to know Oplopanax horridus

If you are someone who has spent any time exploring the lush forests of the Pacific Northwest you are probably familiar with the spiky Oplopanax horridus, commonly referred to as devil’s club.  Its broad leaves and intimidating spines that project from a woody stem make it easy to spot growing against the gentle aesthetic of the riparian wetlands of this region. Devil’s club is native to the forests of the Pacific Northwest, having a growth range from Alaska down to Oregon plus a disconnected species near the Great Lakes region of Michigan and Ontario (Pojar, 2014). While devil’s club is an easily recognized species it is not particularly alluring, and reasonably so; its berries lack any value as food for humans and its thorny stalk can cause much distress to the skin. However this plant actually hides many secret medicinal compounds, used throughout history for the treatment of countless ailments. 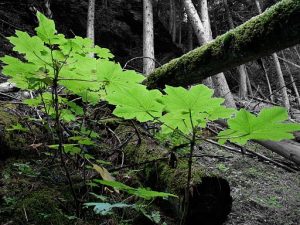 Devil’s club has been widely used by indigenous people of the Pacific Northwest for spiritual practices and as a medicine. Use of the plant is documented in thirty-eight different languages throughout its territory on the west coast of North America (Calway, 2012). Almost every part of the plant has been documented for medicinal use, but most commonly used are its roots and inner bark. The plant’s berries, roots and inner-bark have been used to create many remedies for health conditions such as, fever, problems with the lungs, gastrointestinal upset, ulcers, arthritis, diabetes, lice, fertility, constipation, tuberculosis and many others (American Botanical Society, 2004). Similar to aspirin, it is effective in treating such a wide range of ailments that the Tlingit people native to Alaska refer to it as “Tlingit aspirin”. 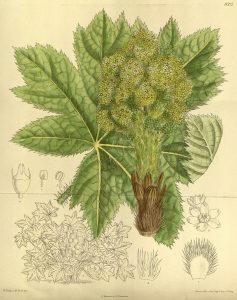 O. horridus was not just used for physical ailments but was also seen as medicine for the spirit. Believed to ward off evil energy, people would hang a piece of devil’s club over the entryways of their homes in times of ceremony or to protect the space from bad intention. The medicinal compounds in the plant were also seen as a cure for mental illness. It was documented in the Tsimshian, Tlingit and Haida tribes that an afflicted person would be beaten with a stem of the plant to introduce the compounds into their system (Latz, Devil’s club: An Ethnobotanical review).

Additionally, devil’s club has been used historically by the first peoples of this region to create materials for arts. Charcoal was formed from its burnt ashes to be used for drawing; and dyes for baskets were made from the plant. The people of this region also utilized its thick, lightweight stalk as material for fishing hooks and walking sticks. (American Botanical Society, 2004)

During tuberculosis outbreaks in North America the indigenous populations used devil’s club as one of their main remedies. It was not until 1997 that the compounds responsible for this medicinal effect were discovered. Falcarindiol is found in the leaves, inner bark and root bark of the devil’s club while oplopandiol is found in the roots, inner bark and stems (Cao, 2014). Both of these chemicals have been shown to have antimycobacterial and anticancer properties. These compounds are of special interest as antimycobacterials because of their effect in treating tuberculosis by targeting Mycobacterium tuberculosis (Inui, 2010). Mycobacterium is a genus of bacteria that has been observed in the lab to have a similar appearance to mold. Both falcarindiol and oplopandiol are polyynes and classified as alkaloids. (Calway, 2012). Polyyne alkaloids function in plants to produce pigments, which are the colors visible to us in plants. 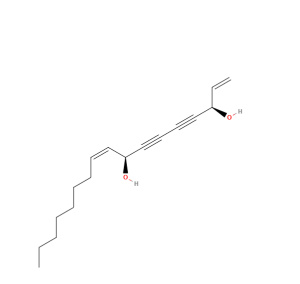 Chemical structure for the alkaloid falcarindiol found in the roots of O. horridus 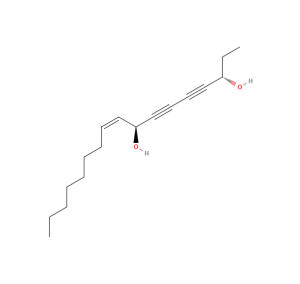 The chemical structure of oplopandiol found in the stems and roots of O. horridus.

The chemical falcarindiol is found in large quantities in the roots of plant and serves as a protector against fungal pathogens. This compound is also found as a fungal defense in the American ginseng and carrot roots (Minto, 2008). Oplopandiol found in the roots, stems and bark of O. horridus is of particular excitement because of its novelty to this species. It has antibacterial properties and builds the plant’s defense against infections and pathogens. 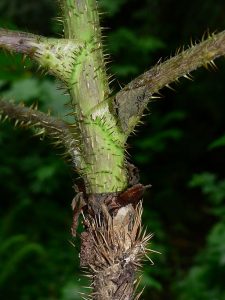 Thoughts on Conservation with Commodification

Recently the use of devil’s club has increased, reaching a global audience that it never has before. You can now find it sold in teas and tinctures in many parts of the world, often marketed as “Alaskan ginseng”. Native groups have sustainably harvested and used devil’s club for generations but as it gains popularity and harvesting becomes unsustainable we could see this species disappear. Devil’s club is particularly sensitive to over harvesting because it takes a long time to recover after being picked and collected. In addition to over harvesting devil’s club also faces an increasing loss of habitat. Devil’s club grows only in pristine riparian areas in the understory of evergreen forests and these clean areas are constantly threatened by development and pollution. As more research is done on the medicinal compounds in O. horridus we can only expect to see an increase in use. Many plants discovered to be medical wonders are soon after threatened by mass harvesting. A sad example of this is the endangered Chinese yew, Taxus chinensis. After being discovered as a successful cancer drug it was harvested at an alarming rate, since the 1990’s about 50% of the yew population in China has been wiped out (Thomas, 2015). It’s important that we begin to think about sustainable harvesting and conservation of Pacific Northwest wetlands or the devil’s club could see the same fate.

P.Thomas,N.Li,and T.Christian, 2015. Taxus chinensis, from the website, Threatened Conifers of The World (http://threatenedconifers.rbge.org.uk/taxa/details/988).
Downloaded on 8 March 2017

By hobvias sudoneighm from Seattle, United States of America (Devil’s Club  Uploaded by Vux) [CC BY 2.0 (http://creativecommons.org/licenses/by/2.0)], via Wikimedia Commons