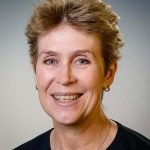 Zita is an organic farmer and a physics professor. Her training is in magneto-hydrodynamics (the study of the dynamics of magnetized plasmas, which are hot ionized gases). Her past research is on fusion energy, and the dynamics of magnetic stars, including our Sun.  Zita’s current work focuses on climate change, sustainability, and policy.

Zita teaches introductory to advanced physics, math, astronomy, astrophysics, and climate change, along with social applications and history and philosophy of science. She worked in energy research (magnetic confinement plasma fusion), then researched nonlinear dynamics in magnetic stars, such as the Sun’s magnetic dynamo. Zita developed a testable dynamo model for certain magnetic stars.  Her solar physics research, with colleagues from the National Center for Atmospheric Research and the Lockheed Martin Solar and Astrophysics Laboratory, contributes to our understanding of the Sun’s magnetic cycles and their effects on Earth.

Evergreen students helped us learn how magnetic waves carry energy from the cool photosphere to the hot solar corona, by observing, calculating, and analyzing data. Zita welcomes student projects that teach her new things and help her keep up to date on research developments in diverse areas of science (not pseudo-science).

Zita’s current work focuses on environment and sustainability.  Students in Energy Systems, contracts, and other programs have analyzed energy available on campus from diverse sources, designed projects, secured funding, and collaborated with Facilities and others to build working systems.  One result is the photovoltaic installation covering Evergreen’s Tacoma campus building since 2017.

When Zita teaches in the undergraduate curriculum, students do research projects in her classes, usually in teams. Contracts or internships can be good options for students who have already taken one of Zita’s programs, and are prepared to deepen their engagement. Students interested in science contracts should demonstrate good math skills. Every student interested in a contract should demonstrate good writing and critical thinking, maturity, and a high level of personal responsibility for their own learning process.

Zita has been teaching in the Masters of Environmental Studies (MES) program since fall 2018.

2000-2008:  solar astrophysics with the High Altitude Observatory at the National Center for Atmospheric Research