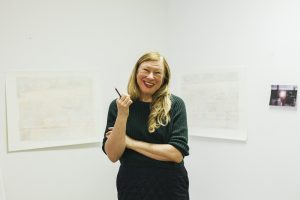 Gretchen Frances Bennett’s (American, b. 1960, Portland, Oregon) recent projects include a solo exhibition at the Frye Art Museum, Seattle, WA (2019); the exhibitions Becoming American, San Juan Island, WA (2018); Fire in the Mountains, Jackson, WY (2018); and The Rough Draft of Everything, Bridge Productions, Seattle, WA (2017). She has read her writing at the Holiday Forever Gallery, Jackson, WY (2017) and as part of the series This Might Not Work at INCA, Seattle, WA (2016). In 2014, Bennett received the Seattle Art Museum’s Betty Bowen Special Recognition Award and completed postgraduate work at the Vermont College of Fine Arts. She is presently at work on her first collection of essays.